I must admit, one of the last things I was expecting to find on a street called Española Way, was a French café. But nestled far down this pretty little street off South Beach, draped in trees heavy with yellow blossom and bars serving the best tequila in Miami, is a petite and chic café, called A la Follie. 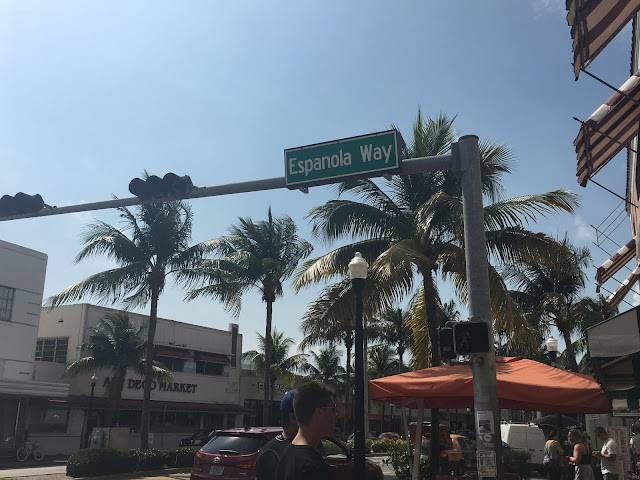 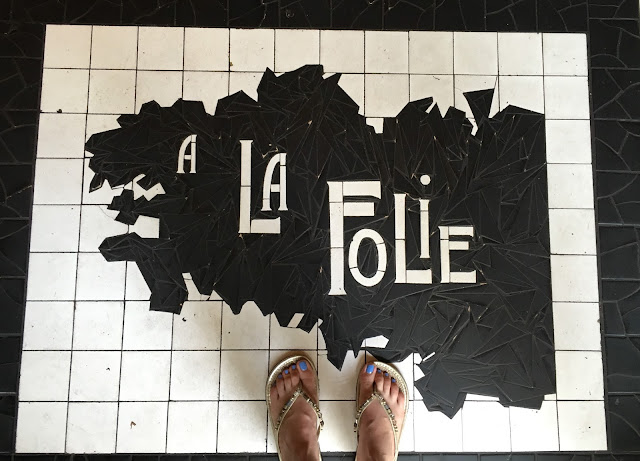 Española Way feels distinctly Spanish with its colourful awnings hanging off the Spanish-style buildings, but everything about A la Folie Café is most definitely French. While it was heart wrenching to walk by cafés serving huevos rancheros, I followed my trusty guide book to find A la Folie, which was easy to miss due to the overgrown palm trees right in front of the entrance, providing shade for its early-morning breakfast goers, sat at spindly little tables lining the pavement – sorry sidewalk! 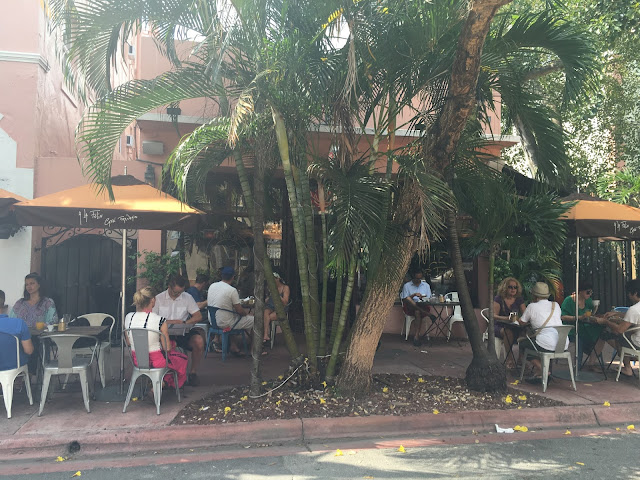 A French friend of mine tells me "a la folie" means "like crazy" and is sung at the end of the 'he loves me, he loves me not' game, which is of French origin.

Inside is full of French memorabilia as well as rows and rows of magazines (even a few in the French language), while Church-style pews line the walls, decorated with navy scatter cushions which complement the black-tiled floor. A framed map of Paris neighbours the French prints on the wall, while a gramophone is cleverly suspended towards the back of the café. This is the kind of place you could happily spend a few of hours with a couple of bowls of coffee, escaping the sun while reading a magazine or two. 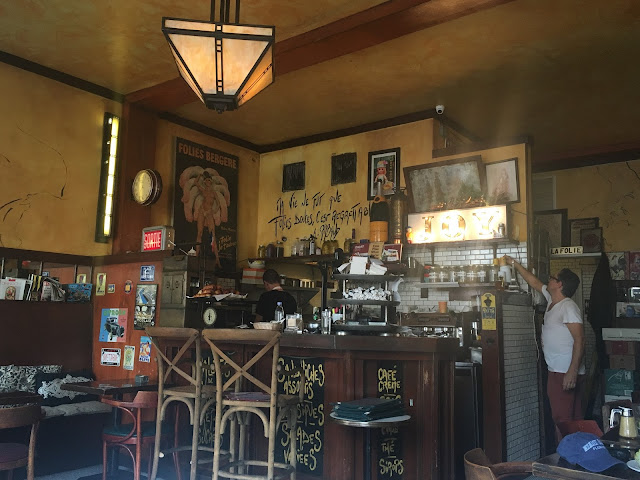 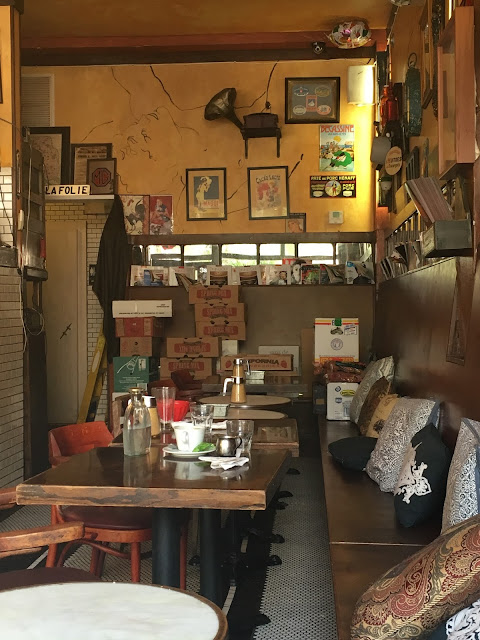 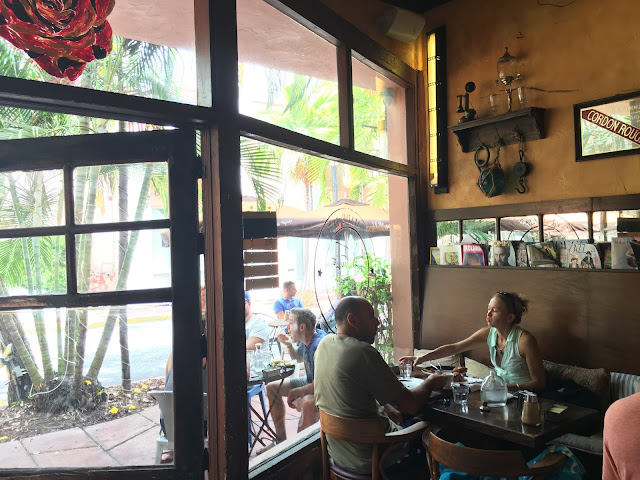 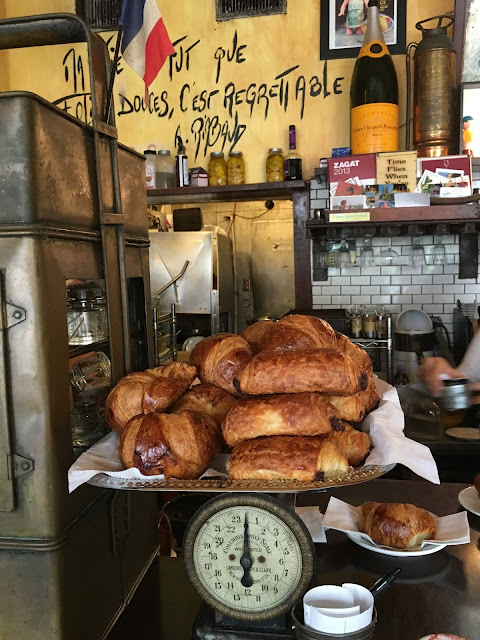 My friend and I order coffee and my café au lait arrives in a big bowl with no handle – how very French – and we peruse the menu, which features a number of traditional dishes including French onion soup and escargot, it was breakfast, so it was time to eat our weight in those carbs the French do so well. 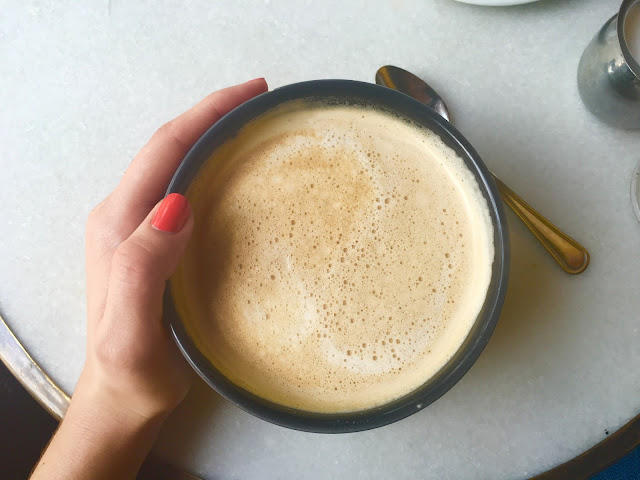 A la Folie Café Français specialises in paper-thin crêpes made from buckwheat, which is what my friend chose, which enveloped a generous helping of blue cheese and spinach, topped with a good handful of toasted almonds. Meanwhile, I decided to go for the breakfast bread basket: a baguette, pain au chocolat, croissant and jam, accompanied by a fruit salad, just in case you wanted to attempt your five a day.

I must say I regretted my choice of baked goods when my friend’s crêpe arrived, which she gladly let me “try” (I mean, share). If I was to return, I’d order the bread basket between two in addition to a breakfast dish. That said, the pastries were buttery and flaky, while the baguette held its crunch even doused with enough jam to cause a severe spike in anyone’s blood-sugar levels. 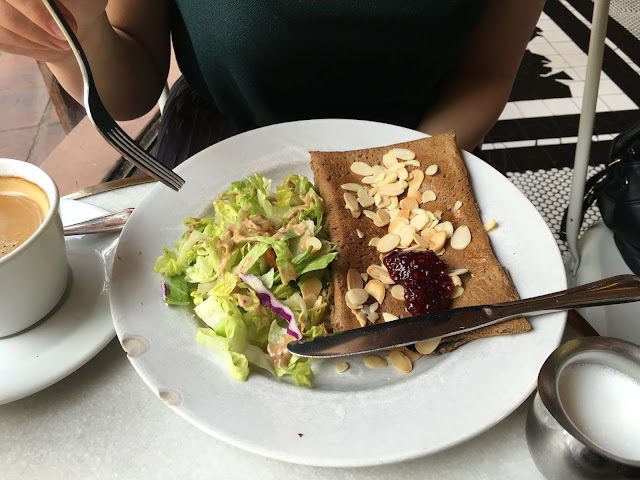 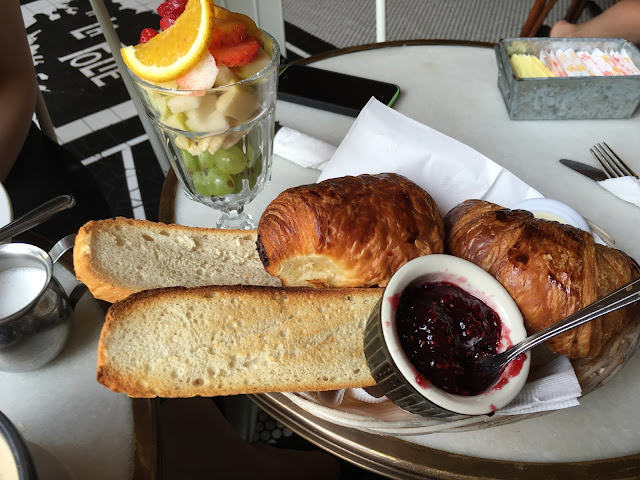 If you’re in Miami Beach and fancy a quiet brunch spot to watch the world go by, try out this little French gem on Española Way.