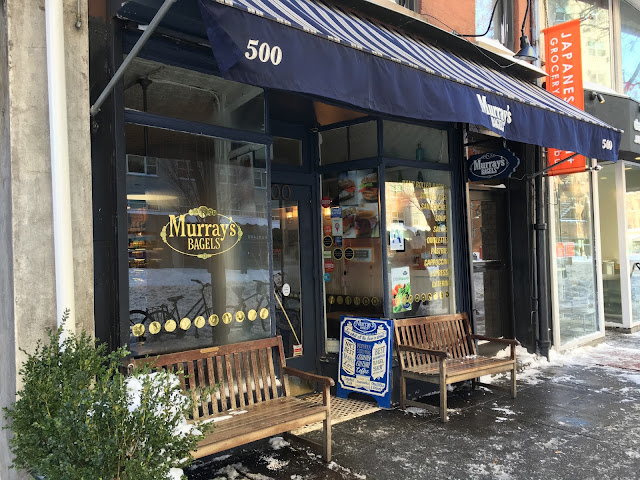 With 15 varieties of traditionally-made bagels at $1.25 or $15 for a baker's dozen, Murray's has been delighting Greenwich Villagers since the mid-nineties.

The story of Murray’s is a "follow your dream" spectacular. Adam Pomerantz was a vice president at Merrill Lynch, but longed to own his own food business. As a child, his father, Murray, would bring home traditional NYC Jewish bagels every Thursday night, and this became Adam’s “soul food”. He set out on a mission to make the best bagels, and in my opinion, sure as hell did!

Also, fact of the day: “Appetizing” is a word used by American Jews in New York to describe food like lox (smoked salmon) and cream cheese spreads – I also love how it can be called the “appy table” - almost the “happy table”, which would definitely make me content. 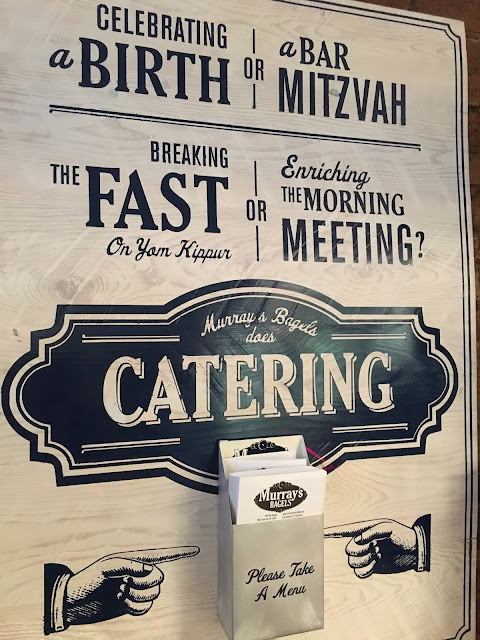 And wow, the homemade cheese spreads. Using Philli as a base, Murray's has concocted some special flavours, including scallion (spring onion, to you and me!), vegetable, sun-dried tomato, Nova Scotia smoked salmon, as well as maple raisin walnut, strawberry and a few tofu spreads. Sadly, two morning visits to Murray's was not enough - I didn't even get to try a cinnamon bagel.


The first visit to Murray's was on the day of the 2016 blizzard, and despite the weather warnings and road closures, the Saturday morning crowd were still descending onto this boutique counter in Greenwich Village. Luckily, most were grabbing their baker's dozen to take refuge in their apartments and wait out the storm, so we grabbed one of the handful of tables and ordered a "Nova" special of cream cheese and huge chunks of smoked salmon, while The Boy (who can't start his day without eggs) chose an Omelette on a Bagel with pastrami, washed down with fresh OJ.

The following day, I changed my order to a simple cream cheese and crispy bacon on an "Everything Bagel" - for those non-New Yorkers, like me, an Everything Bagel has a coating of poppy, caraway, and sesame seeds, with added salt, garlic, and onion. And trust me, the onion hangs around for the rest of the day, you have been warned.

Doughy, heavy, crunchy and satisfying, these bagels were bread-heaven and would please even the grumpiest of Paul Hollywood moods. And, happily, there was no scrimping on the fillings, with cream cheese mushrooming out of the hole in the centre, while the meat or salmon's freshness topped it off perfectly. It was just the best way to line our stomachs before braving the snow for the day.

Seriously, for the best bagels in NYC - and possibly anywhere - head to Greenwich Village for bite from Murray's.

It's been a busy start to 2016 as I was lucky enough to head out New York City for ten days, beginning with a work conference, ending in a crazy blizzard and obviously chowing down on as much food as possible inbetween.

NYC is one of my favourite cities in the world and I never run out of things to do, places to see and food to eat when I'm there. Food highlights this year included: Bagels (see my blog post up later this week on Murray's Bagels), Doughnuttery's delicious mini-doughnuts from Chelsea Market, and yet again, my beloved Buvette, which I had to visit two years in a row. 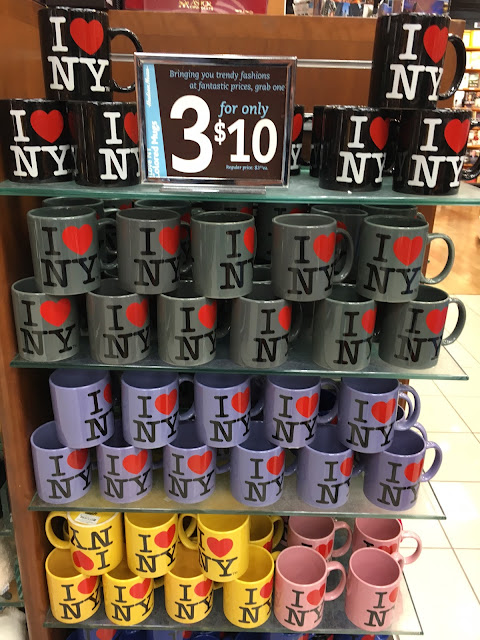 And you definitely needed a mug of coffee (not tea, Americans just fail every time at a proper brew) to keep warm in the blizzard that hit while we were out there. But one of the worst winter storms ever to descend on New York City didn't stop us from enjoying ourselves. Check out some of my Instagram snaps from my long weekend playing tourist in the Big Apple.


Absolutely freeeeezzzzing in NYC today, but finding this cute coffee shop on my morning walk perked me up ❄️☕️ #coffee #nyccoffee #frissoncoffeebar #frissonespresso #nyc #nycfood #foodie #morning #pickmeup
A photo posted by Caroline Baldwin (@breakfastatcarolines) on Jan 19, 2016 at 4:43am PST


I had been in New York about ten minutes and... #seafood #newyork #newyorkfood #nyc #nycfood #crabclaw #oysters #scallops @sham_begum
A photo posted by Caroline Baldwin (@breakfastatcarolines) on Jan 16, 2016 at 4:20pm PST


Stroll around Washington Square Park the morning after the blizzard with a bagel and a coffee. Last morning in NYC ❤️🇺🇸❄️ #washingtonsquarepark #snow #nyc #nycsnow #blizzard2016 #snowzilla #snowmageddon #nycparks #winter #winterwalks #nofilter
A photo posted by Caroline Baldwin (@breakfastatcarolines) on Jan 24, 2016 at 8:20am PST


For more insta-breakfast pics, check out my feed: @breakfastatcarolines
Email ThisBlogThis!Share to TwitterShare to FacebookShare to Pinterest 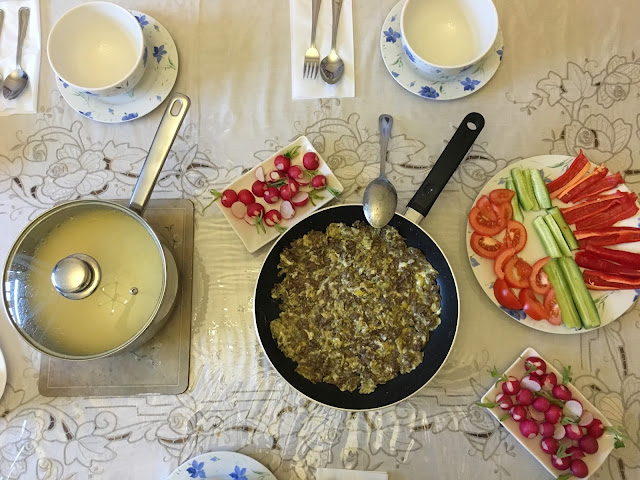 A steaming bowl of kishk on a winter’s day will warm you up in no time. This tangy, sour soup is made from fermented yoghurt to create a creamy, satisfying meal, which is often served at breakfast in Lebanon. 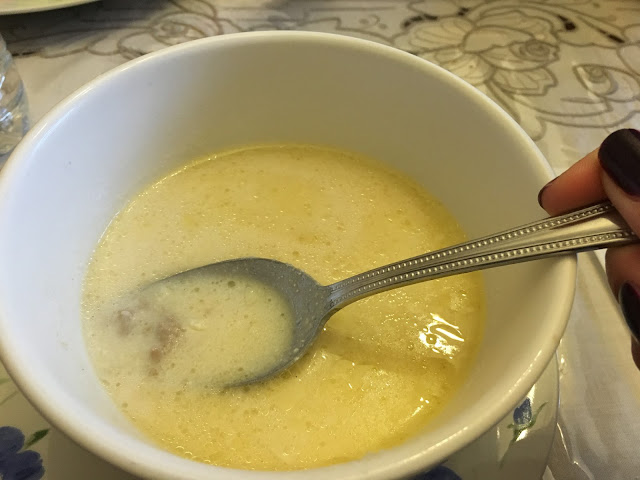 Across the Middle East, Turkey and the Balkans, kishk has different names and different uses, but Yotam Ottolenghi says in The Guardian that the Lebanese (along with Syria, Jordan and Palestine) describe kishk as the preserved fermented yoghurt and wheat.

“At the end of summer, just after the wheat harvest, bulgur is made by boiling, drying and crushing the grain. This is then mixed with the yoghurt, spread on a tray and left until the grain has absorbed all the liquid. The kishk grains are then spread on cloths and left to dry in the sun; a final rubbing reduces them to a powder.”

Another chef I admire, Maureen Abood, says this food preservation method in Lebanon is known as ‘mouneh’, and is necessary to survive during the winter months in the mountains.

While kishk is added to soups and stews as a thickening agent (as well as a powerful punch of flavour), in this instance, I was given it to eat as a breakfast soup. A small amount of minced lamb is stirred into the reconstituted kishk to make a comforting dish which reminded me of a garlicky porridge (check out Maureen’s kishk on her beautiful blog Rose Waterand Orange Blossoms).

I was struggling to describe the taste, and on reading Ottolenghi’s column, he did so perfectly: “Its popularity derives from a depth of umami flavour similar to that you might find in a mature cheese such as parmesan.” Parmesan, that's exactly right!

Served with the kishk soup, was man'ouche, which I tried when I visited Beirut over the summer. But alongside za'atar man'ouche – which I adore– a thicker version of the salty kishk with chopped tomatoes was spread on the dough and placed in a hot oven like a pizza. 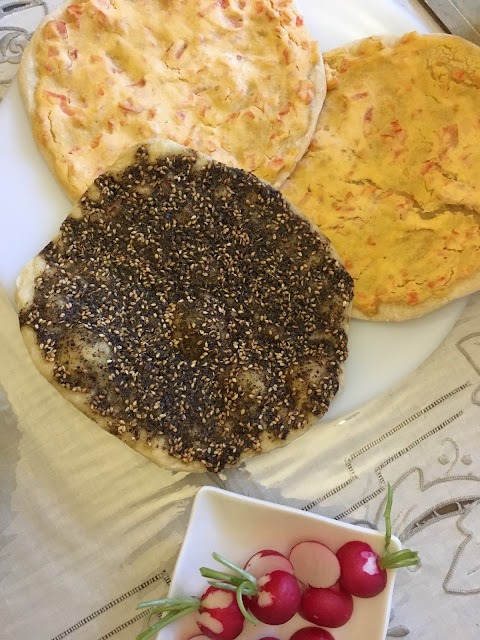 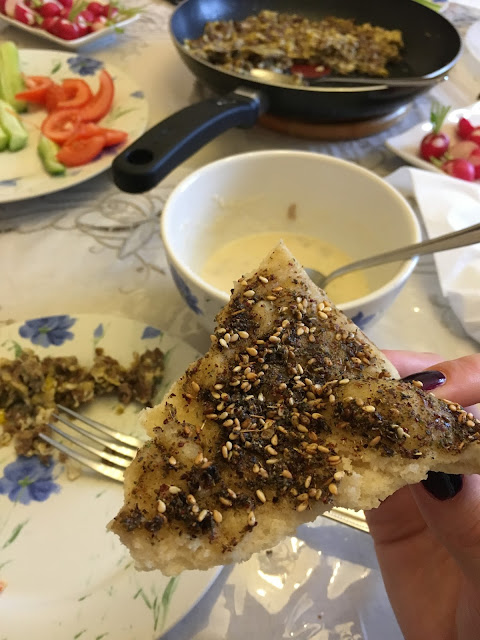 This hearty brunch of kishk soup was also accompanied by minced lamb with eggs, which in Lebanese is called ‘bayd bil lahmeh’. The eggs were thick and luscious from the lamb fat – another substantial breakfast, which reminded me of a lamb shakshuka, minus the tomatoes. I thought this would be my favourite dish of the brunch feast, but it was definitely the kishik. 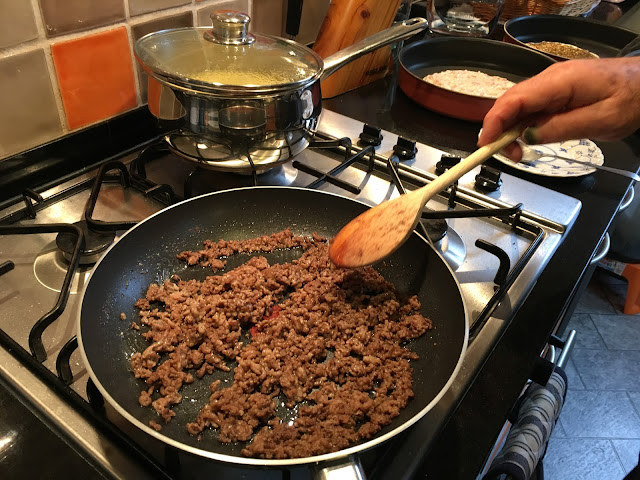 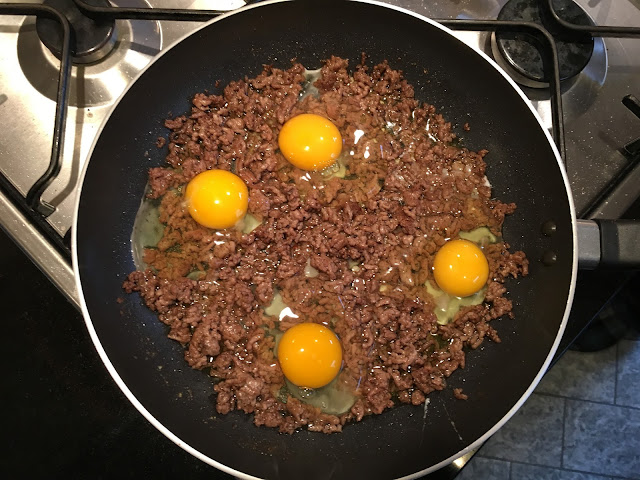 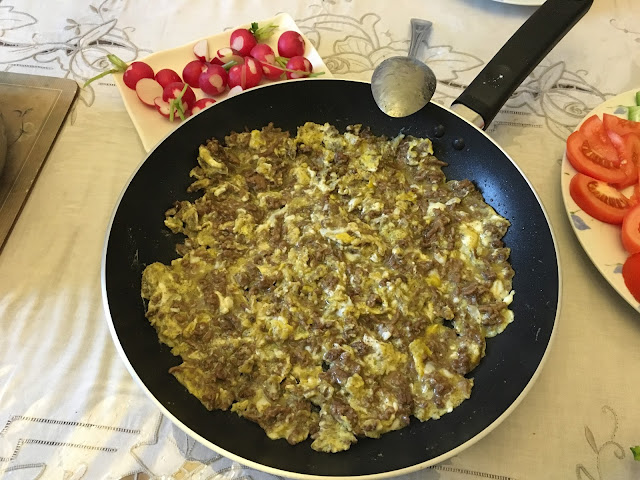 Unlike my ful breakfast in Beirut, which is complemented by mint and onions, this breakfast was partnered with calmer vegetables including radishes, cucumber and peppers. And of course, like all Lebanese meals, flatbread is used to mop up the meat (and to dip in your kishk soup). 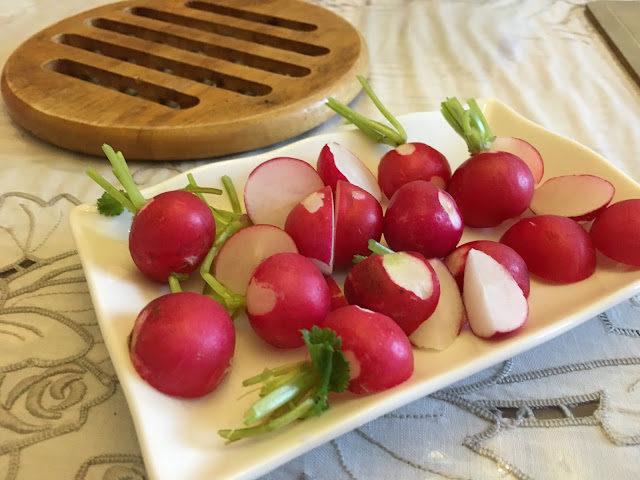 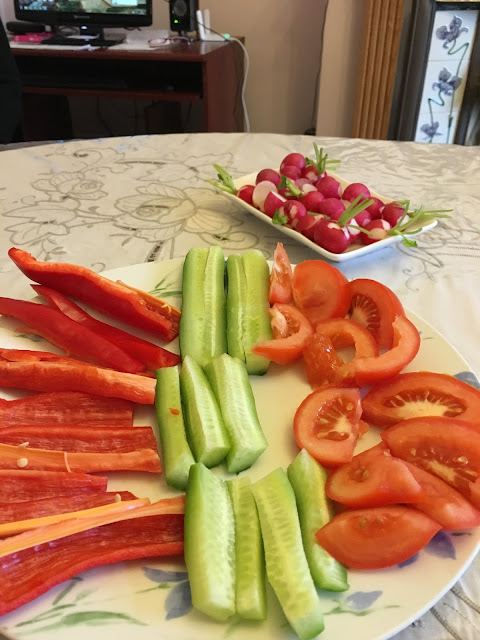 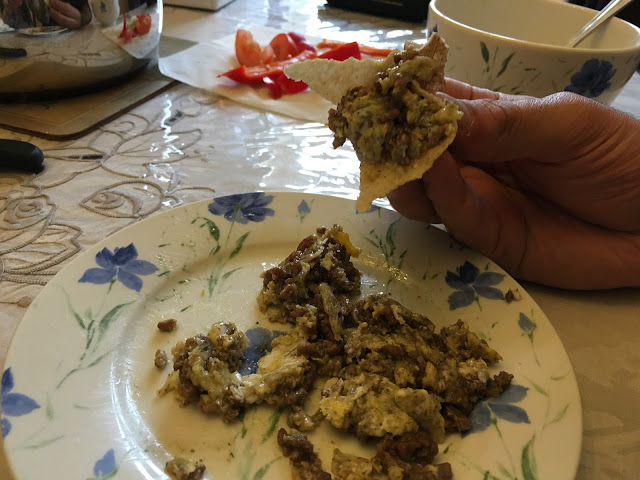 I love how breakfasts in Lebanon are so varied, from sickly sweet knafe to slightly bitter ful. Us Brits have bacon and eggs, cereal, and that's about it. And while pancakes are a staple on brunch menus and avocado toast is the hottest trend to hit London’s food scene in recent years, don’t kid yourself, the first comes from across the pond, while the latter is distinctly down-under.

After writing this blog for the last 18 months I hope it shows how it is possible to expand your breakfast repertoire and, especially with my Middle Eastern learnings, it’s definitely OK to add a bit of spice to your morning meal.