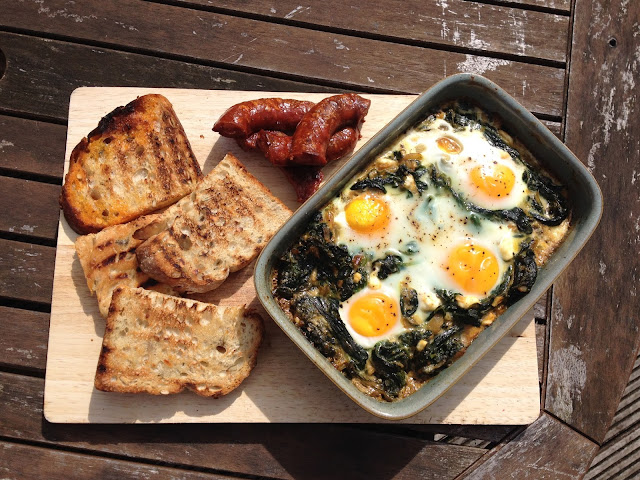 Taking inspiration from Ottolenghi's shakshuka which I attempted earlier this year, and crossing it with one of my favourite breakfasts - Florentine baked eggs - I recently came up with this recipe for green spinach shakshuka one weekend morning.

Perfect for a late brunch, my take on this North African dish is full of Middle Eastern and Mediterranean flavours - zataar bought all the way back from Lebanon, Greek feta cheese, Moroccan spice mix, served alongside chorizo from Spain - yes I realise that last one is maybe an odd choice, but surprisingly the rich griddled sausage really brings this dish to life. Feel free to omit to keep this veggie-friendly.

Enjoy alfresco one weekend morning for a hearty brunch which will see you through until afternoon tea.

Preheat your oven to 180 degrees centigrade.

Fry two finely sliced spring onions in a pan with a knob of butter, then add five thinly sliced new potatoes (either boil beforehand and use canned to save time).

Once the potatoes have started to turn golden at the edges, add a tbsp of Zataar and cook for another minute. Layer the potatoes in the bottom of a dish and drizzle with a splash of olive oil. 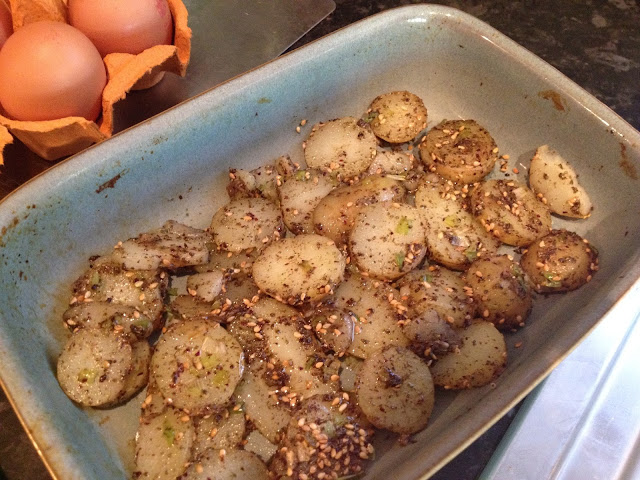 In another pan, fry half a finely sliced onion in a splash of olive oil and a knob of butter. Add a bag and a half of spinach and allow to wilt (you may have to add the spinach in batches, but it will soon wilt to a fraction of its original size).

Once wilted, add a tsp of paprika. I also had some Moroccan spice mix in my cupboard, but a dash of chili powder will do a similar job. 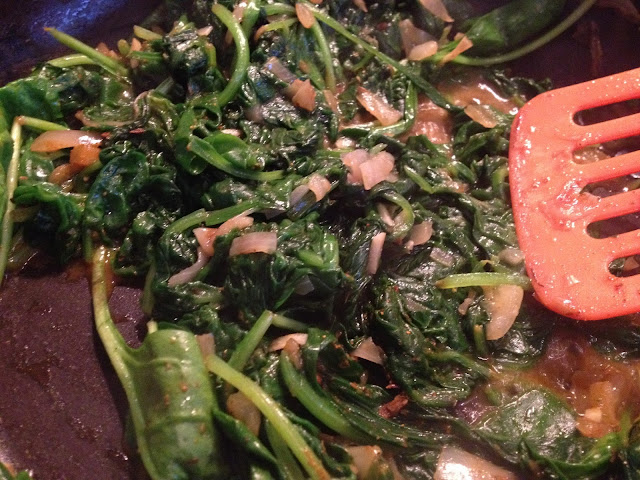 Pour out any excess water from the spinach mixture, add a quarter of a block of diced feta cheese and stir through until softened. Layer on top of the potatoes, making four wells as you go along. 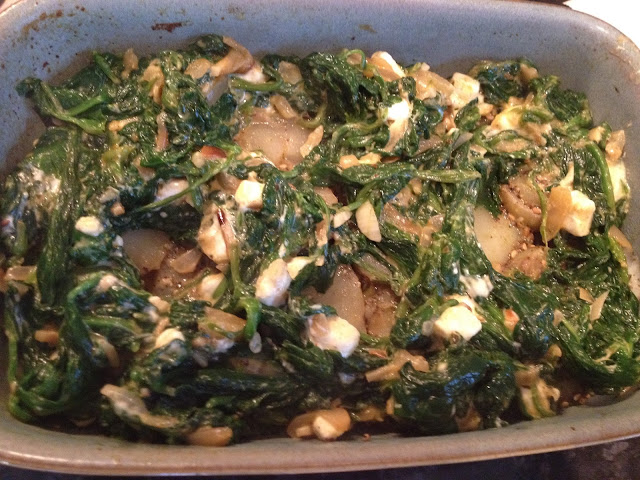 Crack in four eggs. Cover in tin foil and cook in the oven for 20-30 minutes checking every now and again to ensure the eggs don't over cook. 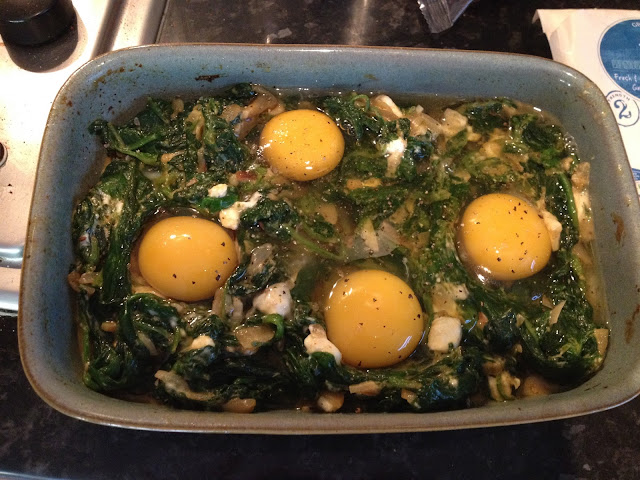 When it's almost ready, heat up a griddle pan and fry slices of bread drizzled with a tiny amount of olive oil (I also fancied slices of chorizo for an extra kick). Keep turning the bread until nicely charred and serve alongside the spinach shakshuka. 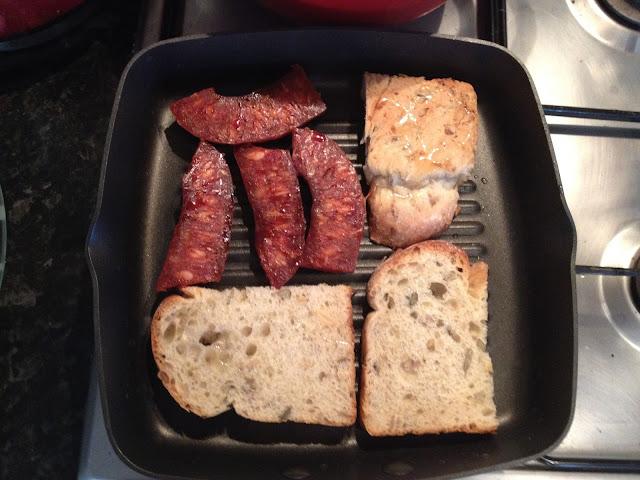 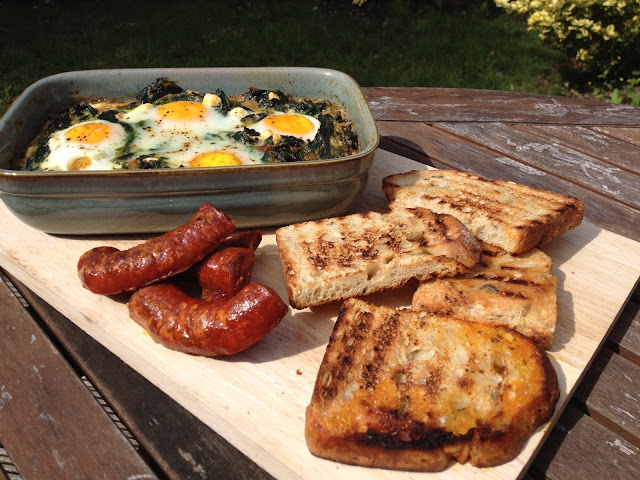 This is the first time I've griddled my bread to chargrill toast and I'm very impressed with the results. Aesthetically it looks so much better than bread popped in a toaster with its attractive, harsh blackened lines, but this chargrill also gives the bread a smoky flavour without actually tasting like you've burnt your toast - which is always a disappointing realisation. 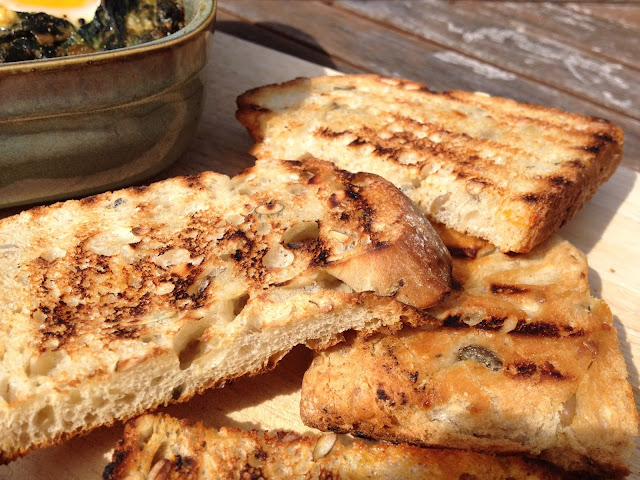 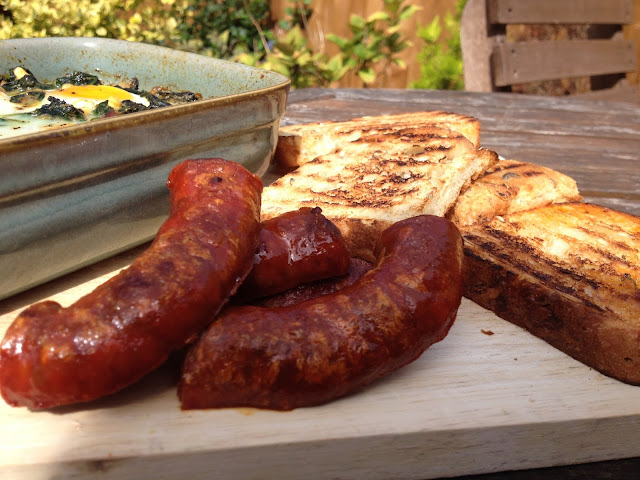 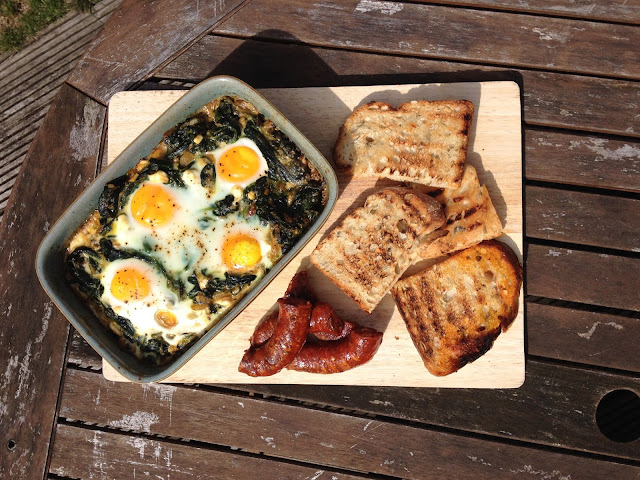 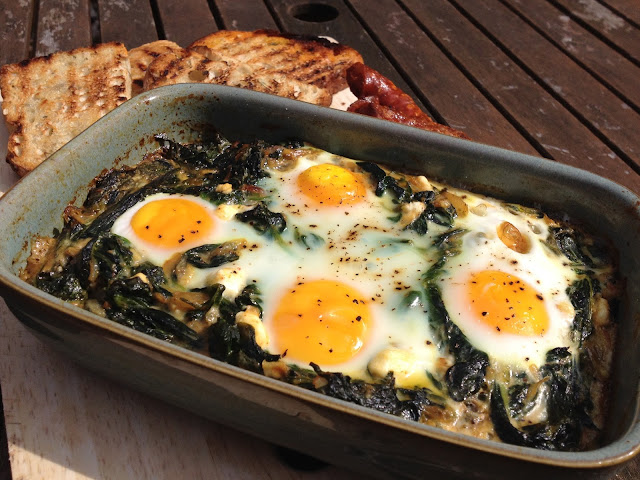