Breakfast at The New Club, Brighton 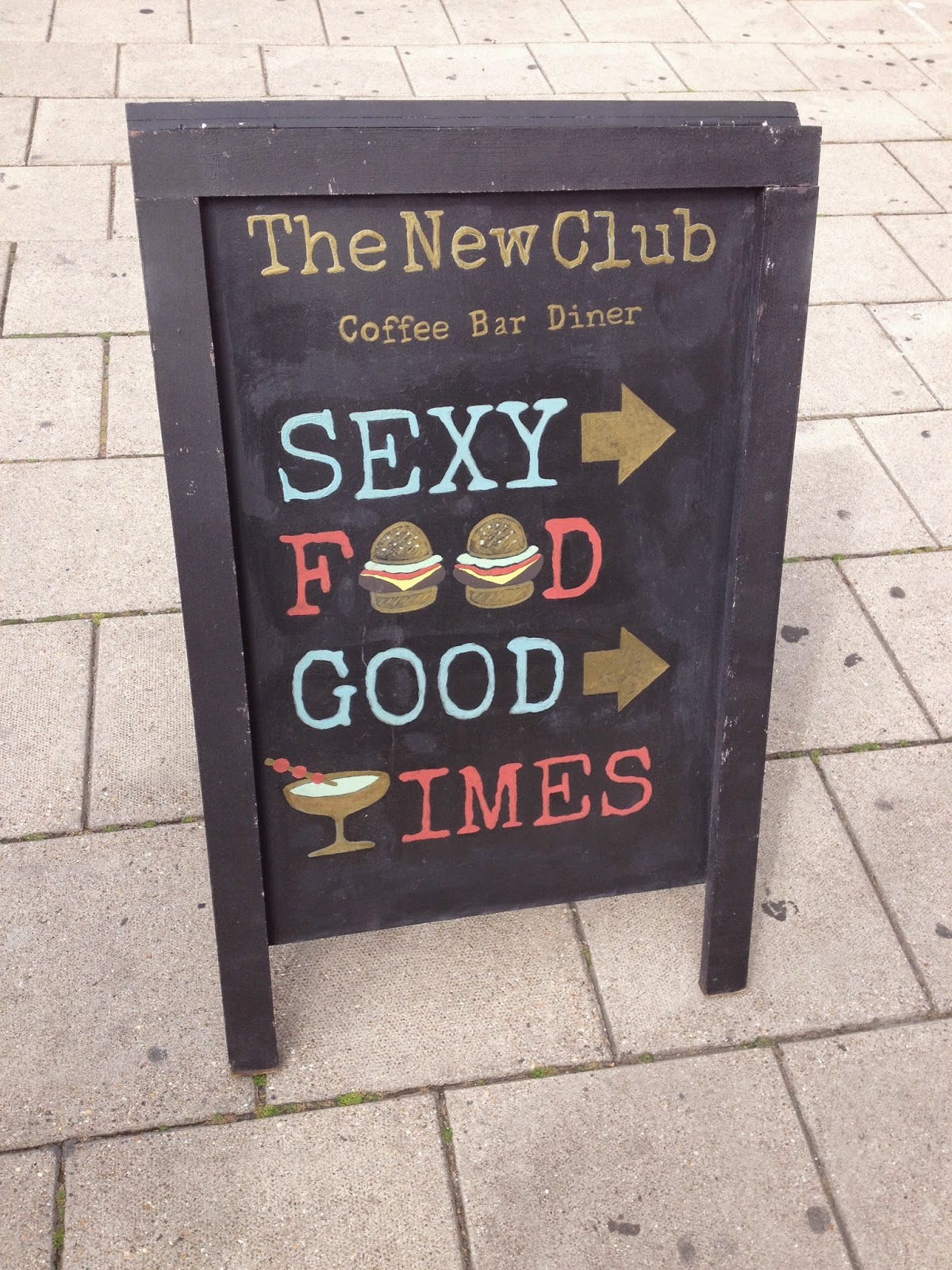 One of the last sunny Saturdays of the summer, my friend and I jumped on a train and hurtled out of London for the day. An hour later we were in Brighton ready to explore, and even more ready for breakfast.

I’d read about The New Club in Stylist magazine which said it was one of the bestplaces to go for brunch and coffee in the UK.

You can’t really say no to that!

A brisk walk along the seafront and we arrived at The New Club which is situated right opposite the crumbling and decrepit West Pier. 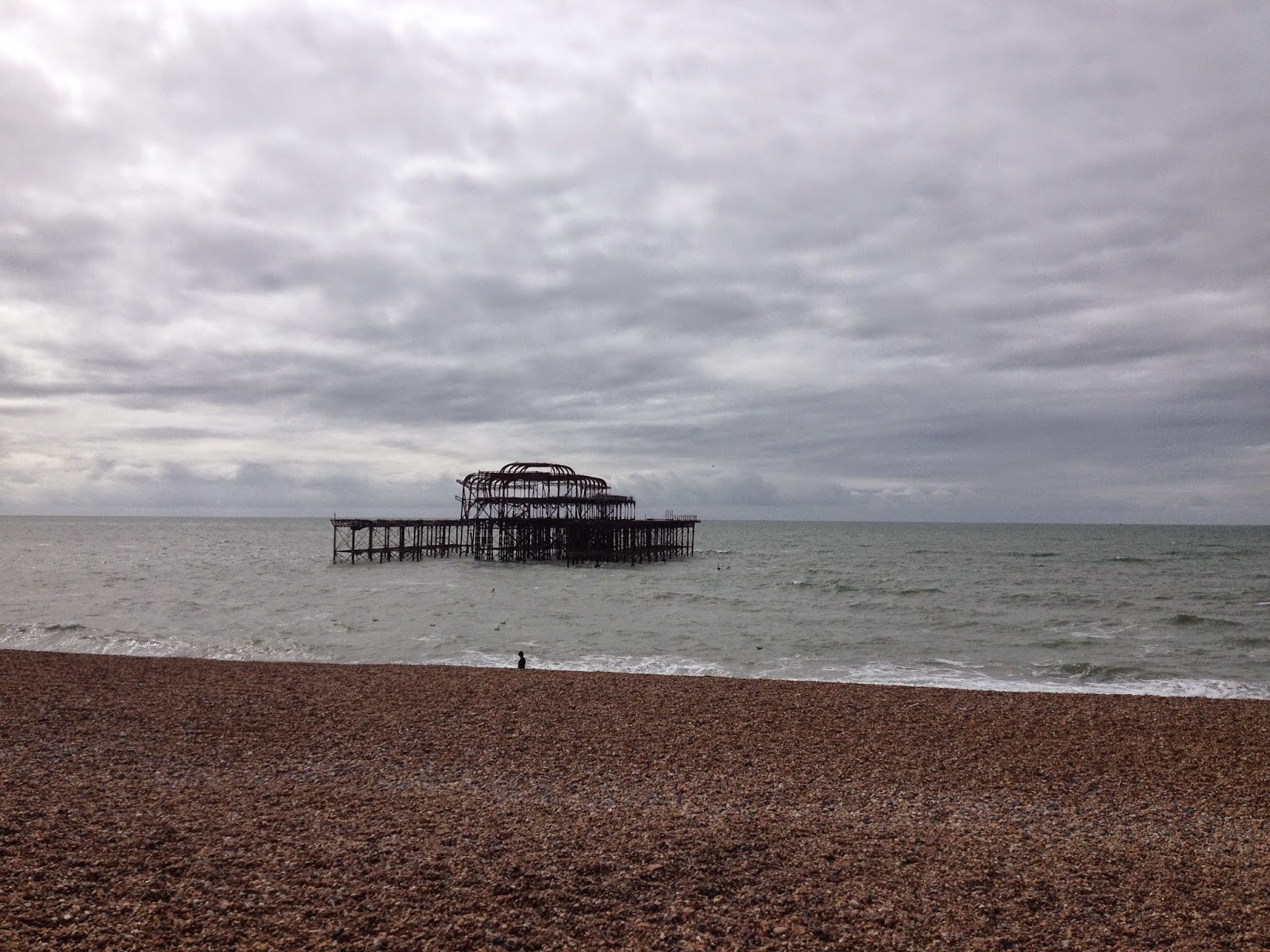 According to its website, The New Club is an “LA indie coffee house meets New York bar and diner.” I was expecting dirty cocktails and even dirtier burgers, so I wasn’t sure what to expect for breakfast.

We settled down at a table and I admired the bar with its brick feature wall and another mural of a Manhattan side street. The place had a nice friendly vibe, with very high ceilings and plenty of natural light. 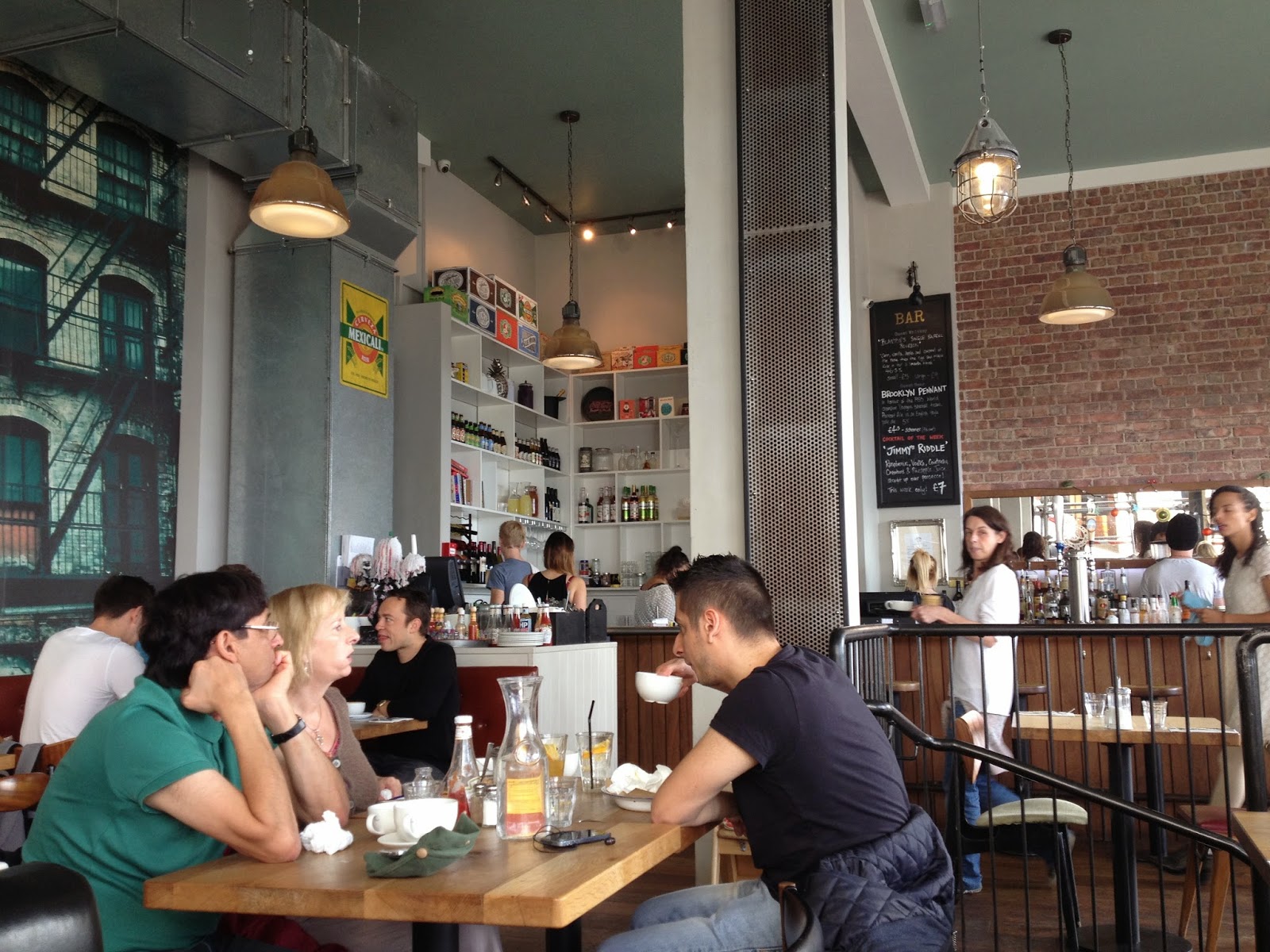 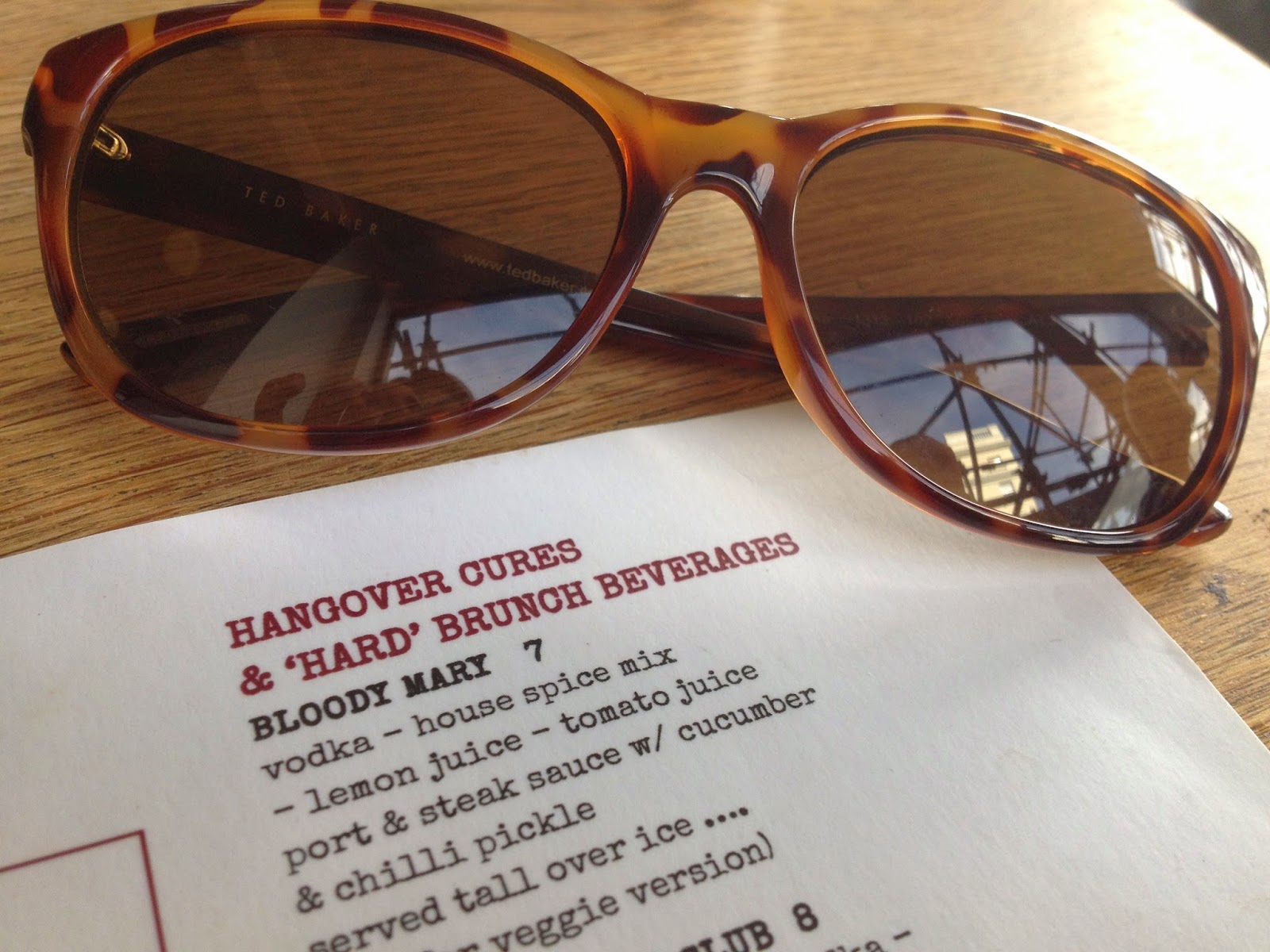 We took a look at the ‘breakfast, hangover cures and hard brunch beverages’ menu. Being in Brighton and by the seaside, I felt like I was on holiday and cheekily ordered one of the ‘hard’ brunch beverages, and my friend followed suite. I had the Mid Morning Margy (7.50) with Tapatio Blanco Tequila, lime juice, orange marmalade and agave syrup, while my friend had a twist on a Blood Mary – The Breakfast Club (8.00), house infused bacon vodka, house spice mix, lemon juice, tomato juice, port & steak sauce with cucumber and chilli pickle. It also came with a slice of crispy bacon. 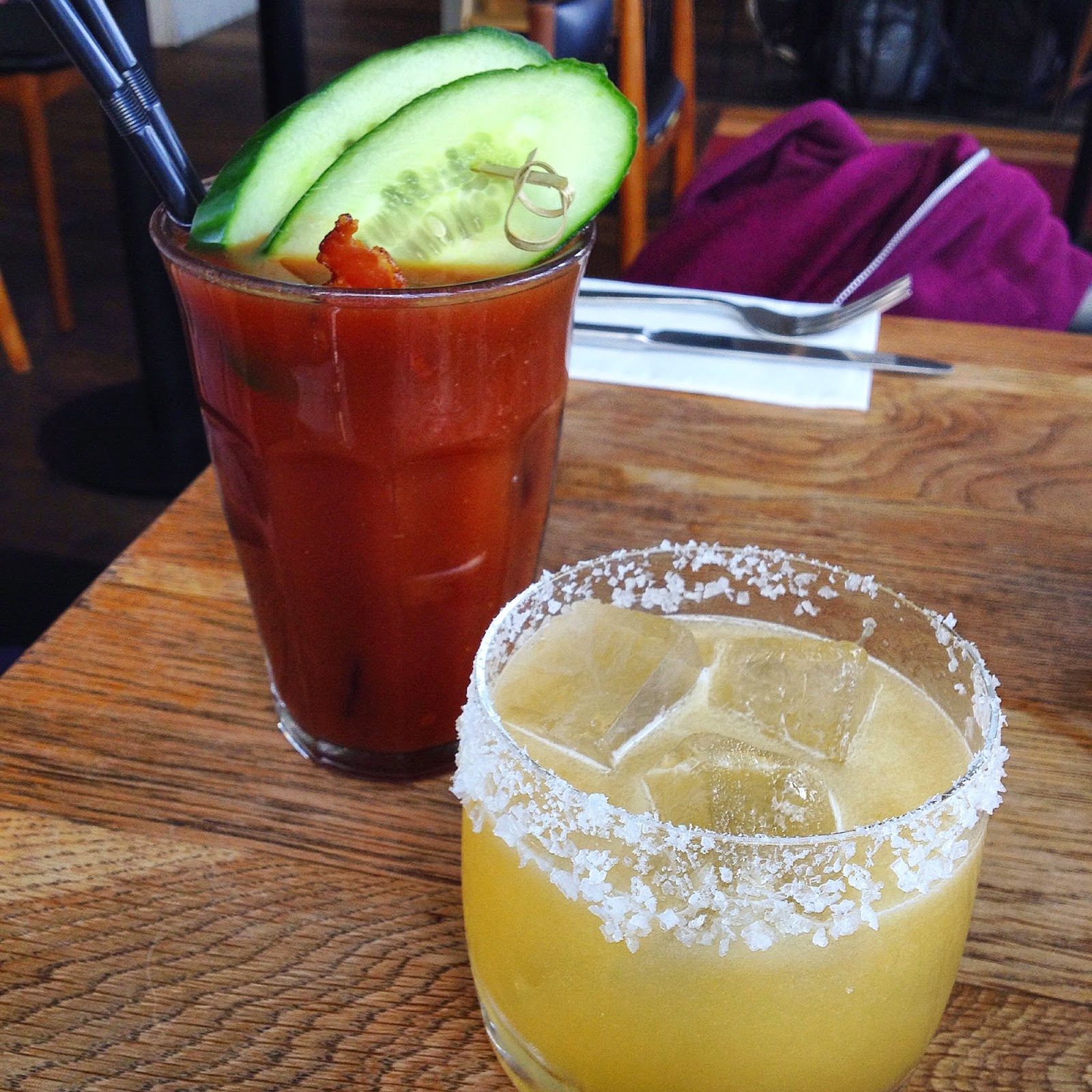 Well it was just about 11am – no judgment please!

The Mid Morning Margy came with a lot of salt around the rim, which definitely woke me up before the tequila met my lips, sadly I didn’t taste much of the marmalade. But my friend’s Breakfast Club Bloody Mary really hit the spot. Stealing a cheeky slurp I can say the spice bounced all around my mouth, while the bacon was a nice novelty addition.

According to the The New Club, it sources local produce where it can and everything is made on site. I settled on the bacon brioche roll (4.00), with smoked streaky bacon, bacon bourbon jam on a toasted brioche bun, while my friend tried the the breakfast burger (6.50), a runny soft free range egg, house sauce, sausage patty, with melted cheese on a brioche bun.


Both meals arrived on old, battered blue rimmed enamel plates, lined with greaseproof paper. While I liked the enamel plates, I’m not sure why it was sat on paper – to save on washing up?

The bacon roll was delicious, with a soft, sweet brioche, plenty of extra crispy bacon and –what had caught my eye in the first place – a gorgeous bacon bourbon jam. Without the jam, it would have been quite ordinary, but it really did take it to another level. I want a jar of that jam in my fridge at home, imagine it stirred into caramelized onions ontop of sausages. Delicious!

I expected the breakfast burger to be bigger than it was – that said, my friend couldn't finish it. Slathered in synthetic-looking American cheese, you could hardly see the burger, and to British tastebuds the cheese was a little strange. But I quite liked it.

After stuffing ourselves with American grub, we quickly slurped down the rest of our breakfast cocktails before deciding where to head next.

A small slice of American pie on the seafront of Brighton, give it a visit when you're next at the seaside.

Here’s some Instagram photos of the rest of our day-trip to Brighton: